Some day I will be free of this pain. The agony of fear. I am ashamed. It is who we have become. It has given us identity. We have inherited this thing.
It lives deep within us and is there to cradle our heads like a womb we know well. It is our familiar. The pain it brings with it has become a sweet unhappiness. We have become addicted to its ways .
It brings us to our VICES that keep us in complacency. It has defined who we are when our wills retreat . It has no mercy on the weak. It has introduced us to jealousy and hatred and self loathing and greed and prejudice and racism and hate and shame. It makes us old and ugly .
It covers our heads with bags and ties our hands and brings us to our knees.
It tells lies in a truth disguise.
We FEAR.
It has taken our Power.
It has chained a Champion..
Love has been forgotten.
We have become comfortably numb.
Even our worship of “GOD “has become an act to satisfy one another.
We hate together.

But there is A FORCE.
The GREATEST OF ALL.
That which turns KINGS TO SERVANTS and changes the face of time with nothing but a choice .
It belongs to you.
It wears a simple smile.
The choice to love.
Love has the face of joy, a happy child, a giving hand.
It is made of acceptance and encouragement and sharing and compassion And forgiveness.
It Does NOT JUDGE the weak nor the poor or those who are different. It does not hurt or embarrass.

We have lived . We have adapted to fear . We have forgotten.
We are innocent.
We are Good.

Because the two ( fear and love) can not occupy the same space at once, only one of the two can be applied in a single CHOICE.
It is ours. It is a journey we walk alone.
We are accountable.

Fear will not give in to easy tho.
It wants to blame others when WE Choose NOT to love.
It is a self ran program that has fooled us into believing we Need it to be identified as one of the ” many”.

But only the few know this:

FEAR FEARS YOUR LOVE.
It will die without your energy.
It holds tight like good loving fleeting in the night .

your power is yours.

your power is yours to keep. it exists within your thoughts, feelings, and choices. it belongs to you. donâ€™t give it away. and donâ€™t condemn others when you choose to give your power away because they chose not to. choose again. empowerment never comes from an external source.

suffering is a decision.

perception defines the inward experience of anything. choose better.

sit with that. feel it out. take it in.

to imply that choice alone is the difference between feeling bad, good, or great, or between feeling powerless and powerful is almost tauntingly, if not deceptively, simple sounding. however, it is simple, but not necessarily easy. the trick is that a half-hearted commitment won’t suffice. there is no middle ground.

here are some things that have helped me retain my power:

This was originally posted on September 4, 2010.

Life is calling you. All the time. Do this. Do that. Don’t do anything at all. There’s always a fork in the road. Sometimes you don’t even know it’s there, but it is. Sometimes you hear it, see it, feel it…this urge…this moment that comes to visit briefly. It may whisper, it may shout, but it’s always saying something. Are you listening?

The perpetual, invisible fork is the following question: how are you going to respond? To what? To everything.

Out of nowhere, my job suddenly became a place I slightly dreaded. I wasn’t even fully aware of it, but I noticed it when I realized time was my obsession. “What time is it?” and “how much longer will I be here?” Sure signs of danger. Everyone and everything was a problem and I played the victim to all the haphazard incidents and wrongdoings.

When somebody/everybody else is always the problem, maybe the problem is really you.

END_OF_DOCUMENT_TOKEN_TO_BE_REPLACED

#notetoself, consider this, pay attention, rewritable words, thoughts are you listening, be the change, call to adventure, change, choose, energy, fork in the road, how are you going to respond, i am the problem, inner world, life, life is calling you, listen to the call, opportunity, outer world, power, problem is really me, problem is really you, response, you are the problem, you have power, you have power in your life 0 Comment

what’s in your word cloud?

Originally written in 1997 by Chicago Tribune columnist, Mary Schmich, under the title “Advice, like youth, probably just wasted on the young”, Baz Luhrmann set it to music and released “Everybody’s Free (To Wear Sunscreen)” in 1999.

There’s some great advice in here, such as:

Enjoy the power and beauty of your youth. Oh, never mind.
You will not understand the power and beauty of your youth until they’ve faded.
But trust me, in 20 years, you’ll look back at photos of yourself and recall in a way you can’t grasp now
how much possibility lay before you and how fabulous you really looked.
You are not as fat as you imagine.

END_OF_DOCUMENT_TOKEN_TO_BE_REPLACED

inspiring, listen, moment of truth, pay attention and don't put up with those who are reckless with yours, baz, Baz Luhrmann, beauty, chicago tribune, don't be afraid of it or what other people think of it, don't be reckless with other people's hearts, don't feel guilty if you don't know what to do with your life, don't put up with people who are reckless with yours, don't waste your time on jealousy, enjoy the power and beauty of your youth, enjoy your body, everybody's free, everybody's free (to wear sunscreen), fade, faded, it's the greatest instrument you'll ever own, Josh Abrahams, luhrman, mary schmich, Nellee Hooper, power, sometimes you're ahead, sometimes you're behind, the most interesting people, the race is long and in the end it's oonly with yourself, to wear sunscreen, use it every way you can, wear sunscreen, you are not as fat as you imagine, you vs you, youth 2 Comments

Life is calling you. All the time. Do this. Do that. Don’t do anything at all. There’s always a fork in the road. Sometimes you don’t even know it’s there, but it is. Sometimes you hear it, see it, feel it…this urge…this moment that comes to visit briefly. It may whisper, it may shout, but it’s always saying something. Are you listening?

The perpetual, invisible fork is the following question: how are you going to respond? To what? To everything.

Out of nowhere, my job suddenly became a place I slightly dreaded. I wasn’t even fully aware of it, but I noticed it when I realized time was my obsession. “What time is it?” and “how much longer will I be here?” Sure signs of danger. Everyone and everything was a problem and I played the victim to all the haphazard incidents and wrongdoings.

When somebody/everybody else is always the problem, maybe the problem is really you.

END_OF_DOCUMENT_TOKEN_TO_BE_REPLACED

Personal power and self love

The topic of last night’s We Think Radio show was power. We asked with whom does power reside: people, industries/systems, or the government? Ultimately, we came to the conclusion that power should be with the people, but for various reasons, people don’t believe they have power, and accordingly, don’t. When people decide they do have power and begin to act with that power, there will be a monumental shift in the understanding of who wields the most power.

Power belongs to the entity or individual(s) with the least fear and/or with the ability to induce the most fear. Fear and power go hand-in-hand, the same way that fear and powerlessness do. When we, as individuals, no longer carry so much fear in our hearts, collectively, we will exercise the most power. Check out V for Vendetta.

After the show, I thought of a question I wish I’d thought of during the show: Maintaining one’s personal power doesn’t necessarily preclude a love of self, but can people truly love themselves and give away their personal power?

I don’t have an answer, but I’m sure you have some thoughts. Please share.

TONIGHT’S TOPIC: POWER…ultimately who has it? The government, corporations or the people? Tune in and join the discussion. Tonight’s guest host will beÃ‚Â Kwesi Ronald E.Ã‚Â Harris of www.khepera.org.

We Think Radio: using the power of sex 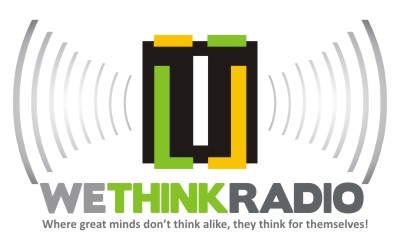 Tonight we discussed how to develop and channel the power of sex to obtain your goals. Napoleon Hill discussed transmuting sexual energy in his book Think and Grow Rich. See chapter 11 to find out how.

I was scanning the archives for something in particular that I never found. What I did find, however, was something I wrote a while ago. As I read it, I realized it had a certain weight and energy to it that needed to be put out into the cosmos once more. So…reduce, reuse, recycle:

Does your voice/opinion/life matter? Yes…I’m talking to YOU!

**While reading this note, please consider the possibility that it was written just for you.**

Yes, our political system is purposely full of shit. And yes, power with Godlessness is always corrupted, therefore the US political system will probably remain corrupted. But is the only power you have in the form of a vote that’s “taken into consideration” by a representative who then casts their “representative” vote?

So much goes on in our society that we — WE, you and I– dislike, yet do nothing about. We complain about the political process, the politicians, the war, the taxes, the economic state, the this, the that…yet sit idly and complacently as we scan online social networks for new blogs, pictures, and wall posts. Okay, maybe you don’t, but…

Thing is…voting is ONE way that we’re able to voice our opinions, but it’s not the ONLY way. We can’t keep leaving it up to the media to tell us what’s going on in the world. We can’t leave it up to government to make changes in the world.

That word “better” is problematic. “What is exactly does it mean?” you may want to know. I’ll tell you. Better is access to things that sustain life, not because you have money, but because you have life. Better is cooperative living rather than individualistic selfishness. We’re all really messed up from the US’ theme of rugged individualism. A divided house will never stand. (Consider that maybe that’s the point.) Better is peace and open dialogue. Better is clean air and water and sustainability. Better is food that you can pronounce because it’s REAL and has never seen a factory or a plastic bag. Better is love, understanding, and the presence of God opposed to the lurking presence of fear and evil. Better is an education for everyone that includes critical thinking. Better is racially and culturally inclusive media for people of all ages, races, and nationalities. Better is music that makes your heart, soul, and body sing and dance because you’re uplifted and moved closer to God. Better is men that respect and love women. Better is women that respect themselves and can trust men. Better is when networks of people from all over the world unite for common causes not for direct profit gain, but because we’re all one body of people spread across several lands.